Innovation and high technology are cold values ​​if not complemented by the warmth provided by the Clinic’s professional team, always inclined to take care of the human factor.

Our clinic opened its doors in 2005, and since then, we have made a difference in the city of Alajuela. At that time, we started with an Olympus Video Endoscope, and it was the first private center in the province with a piece of video equipment to perform gastroscopies and colonoscopies. We took a step forward in the technological ladder that forced other centers to update, and this was a positive change for all Alajuela residents.

In 2010, Dr. Navarro’s dream of improving his endoscopes to ones that had high definition and chromoendoscopy was fulfilled. Two technologies that were revolutionizing endoscopy in other countries and, improving the detection of early and small lesions in patients. That year we released a Fujinon 4400 Video Endoscope, which was the most advanced technology launched to date, and we were the second private center nationwide to have such a modern endoscope.

Endoscopes require renovation, and for 2017 we acquired the latest in technology worldwide, the Fujifilm 7000 series endoscopy system. With this acquisition, we marked a high point since we were the first in the American continent to place the purchase order and we were delivered from third parties on a continental level, so we were the first in the country to have this highly advanced technology.

In fact, to date, only four centers nationwide (public or private) have this advanced technology. This series makes a radical departure from endoscopic viewing that outperforms all of its competitors. It has a four-source LED light source (which provides a clearer and brighter image) and digital stains (BLI and LCI) that improve the identification of lesions for their characterization. The endoscopes that come with this series offer a very high resolution (greater than 1,200 Kpixels) and an optical zoom of up to x100.

A few months after opening our doors, in 2005, we acquired our first electrosurgical equipment, which allowed us to remove polyps from the colon and stomach and treat digestive bleeding by being able to cauterize blood vessels.

Innovating as always, we were the first in Alajuela to have private electrocautery. It was a good piece of equipment, but in those years there was an advance that involved a technology called Electrocautery with Argon Plasma and another technology for polypectomy (safer for patients)

called EndoCut mode. These two technologies are present in the modern ERBE Bio 200S electrocautery that was obtained several years ago and allows us to perform advanced therapeutics at the level of any endoscopic center in the country or in the world.

We got the first ERBE equipment in the whole province, then the CCSS HSRA bought a similar one. To date, in the city of Alajuela, no other center has these technologies. 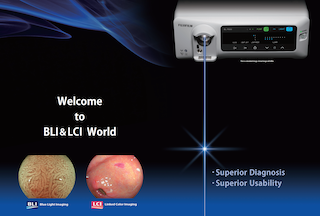 Use of CO2 in colonoscopies:

We have a CO2 gas insufflation equipment. This equipment introduces CO2 instead of air during colonoscopies. Carbon dioxide is easily absorbed through the colon and then expelled through the lungs in patients.

The air that is commonly used in colonoscopies is difficult to expel from the colon, and staying in it after the colonoscopy may cause abdominal pain. This pain is relieved when the air is released later, but this can be quite annoying for the patient.

As we always think of our patients, we decided to obtain equipment that would replace air with CO2, and we have had it for several years. We were among the first nationwide to have it and even today few centers take that extra care of using CO2 in patients, which we consider to be regrettable.

The advantage that CO2 provides is that it practically eliminates abdominal pain after colonoscopies. In addition, in a possible perforation, having CO2 makes an important difference because it allows an endoscopic resolution of the complication without major complications that the air provides. An abdominal cavity filled with air (which is difficult to expel) is not the same as an abdominal cavity filled with CO2 that is naturally moved by the circulatory system. Therefore, the CO2 equipment gives our patients more comfort and greater safety in the event of rare complications.

We are proud to give the best of ourselves and to be accompanied by cutting-edge technology for the well-being of our patients.

We have multiple devices to perform endoscopic therapy and to attend to any complication that the patient presents.

Clips allow compression of blood vessels to stop or prevent gastrointestinal bleeding. They also let the closure of defects in the mucosa that allow treating an intestinal perforation without surgery or preventing it after a complicated procedure.

We have equipment for dilatation of strictures of the esophagus or other gastrointestinal organs.

We can perform ligation of esophageal varices or hemorrhoids.

We place Percutaneous Endoscopic Gastrostomies (PEG) that are required by patients with problems to feed through the mouth.

All this requires intricated and expensive accessories, which we have in our clinic permanently because they can be needed at any time. It is not the same to have them on hand than to have to ask for them from the supplier because an accessory could be taken care of with urgent necessity. We stay well equipped at all times, always ready.