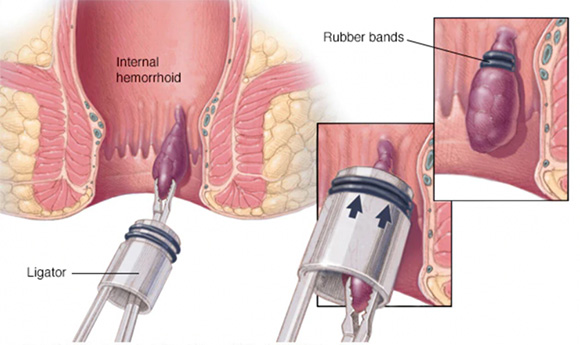 Hemorrhoidal veins are veins that we all have at the end of the rectum and their presence is normal. They generally don’t bother people. They become a problem when they bleed or when they are thrombosed (an internal clot forms) because they are painful.
Hemorrhoid ligation is a procedure that treats internal hemorrhoids. It is the first-choice procedure for endoscopic hemorrhoid management. It consists of capturing hemorrhoid with a rubber band until the vessel is strangled, then an ulcer is generated where the hemorrhoid was and it heals without leaving the hemorrhoid.

What are hemorrhoids? What are the symptoms?

A clot can also form inside hemorrhoids (thrombosis) and this is usually very painful.
The majority of patients who come to colonoscopy already have slight dilatation of the hemorrhoidal veins and therefore, small internal hemorrhoids are reported, but the vast majority of these patients do not have to be given any treatment since they are part of the normality of the human body.

They are treated when there is bleeding, local discomfort, or thrombosis pain. In other words, we can affirm that asymptomatic hemorrhoids are considered normal and do not require treatment.

What should I do if I bleed in the rectum?

You should consult your doctor immediately. At the same time, the physician must perform a good medical history and a digital rectal examination. Taking several factors into account, the physician must decide whether additional studies such as colonoscopy are needed.

I am convinced that any patient over 40 years of age with rectal bleeding, should have a colonoscopy promptly. This is essential to detect colon and rectal cancer.

It is a pity, that we often see patients who bled and ignored the symptom, blamed it on a hemorrhoid and consulted until they already had advanced cancer.
International standards have for years recommended a colonoscopy or stool occult blood test to everyone over 50 to prevent colon cancer. If we add visible blood to the equation, colonoscopy should be the test of choice and should be done as soon as possible.

Recently the American College of Phisicians recommends it from the age of 45 to the general population. So there is no justification for someone over the age of 50 to bleed and not have the colonoscopy done right away.

How are hemorrhoids treated?

The asymptomatic ones do not require treatment.
Those that cause discomforts such as bleeding or thrombosis are treated with drugs that decrease the flow to the hemorrhoids and with local creams that help to deflate and heal them, this when the symptoms are intermittent, infrequent or mild.
Thrombosed hemorrhoids can be drained by a simple local operation that removes the clot from the hemorrhoid and relieves the pain that the it generates.
Hemorrhoids that bleed heavily or often can be treated endoscopically or with surgery. Endoscopic treatment is preferred because it is less traumatic, quicker to recover, and more economically accessible. Surgical treatment (operating hemorrhoids) is reserved for the most severe cases and for cases where other treatments have failed.
Endoscopically several options can be used, but the most widespread and accepted is hemorrhoid ligation.

Hemorrhoids can also be cauterized with radiofrequency, with argon plasma or with bipolar cauterization, they can be sclerosed with intrahemorrhoidal injections (as when injecting a varicose vein in one leg). Ligation is probably one of the least painful, it is the one that is most practiced and therefore it is the first choice endoscopically speaking.
The most severe cases of hemorrhoids must be treated surgically with a hemorrhoidectomy. This technique is used when other available therapies have failed, in large hemorrhoids (grade IV) or when there is significant prolapse of the rectum in the patient.

It is very effective but quite annoying for the patient with several days of convalescence that is usually painful. The cost of it, is much higher with the advantage that it is usually done and should not be repeated. However, all available treatments may have a recurrence of the problem, hemorrhoids may regrow and bother with endoscopic and surgical treatment.

What are the advantages of hemorrhoid ligation? Why is it the most recommended choice?

Endoscopic methods are generally preferred over surgical ones because of their greater safety and faster recovery.
Of all endoscopic methods, the one that has been performed the most internationally is hemorrhoid ligation, with great safety and high success rates. Without underestimating the other options, it is the ligature that has been studied the most and therefore, the one that can demonstrate the best objective results.
Recovery from a hemorrhoid ligation is accomplished in a week or less, while hemorrhoid surgery has a recovery of 2 or 3 weeks, and is much more painful. From an economic point of view, surgery is at least three times more expensive for the patient than ligation.

How is hemorrhoid ligation performed? What preparation does ligation require?

A colonoscopy should always be performed before to rule out other lesions that may bleed and be more dangerous to the patient such as cancer or polyp. Therefore you have to clean the intestine and then the day before you must follow a special diet and use a laxative.
Colonoscopy, as always, is performed under sedation so that the patient does not have traumatic experiences. If candidate varices are seen to be ligated, the colonoscopy will be terminated and the patient will be awakened.

This is because to link the veins, the doctor and the patient need to communicate during the procedure. The ligation is then performed with the patient relaxed but conscious so that the patient is usually not going to remember the procedure, but he could tell if before releasing each league he felt pain. If the patient is in pain, the ligament does not release and is repositioned to release when the patient does not hurt. If a little pain is felt, it would be very temporary and the person may not remember it because it continues with residual sedation.

To specifically bind, the doctor places himself on hemorrhoid and pulls it towards the endoscope using a vacuum created by aspiration, at the time the hemorrhoid has been captured, but it is important to verify that the patient does not have acute pain. If the patient says it doesn’t hurt, the ligation is released and that’s it.

Once the ligament has been placed, the blood stops circulating through that dilated vein and rather begins a process of necrosis (death) of the vein. Within a few hours, the tissue turns blackish and a few days later it detaches, leaving an ulcer at the base.

When the tissue is detached, the ligament is released and expelled through the rectum, the resulting ulcer then heals and the scar forms where there used to be a dilated vein, thus the ligation makes hemorrhoids disappear or decrease in size.
The ligation technique should be repeated one to two months later until the hemorrhoids disappear or are very small. In our experience, patients do much better with just one session, and many choose not to repeat sessions because of the marked improvement.

What is our experience linking internal hemorrhoids?

Hemorrhoid ligation uses the same principle of esophageal varices ligation. We have been performing the aforementioned since 2003, as soon as we started in the world of gastroenterology.

Around 2007 we started with hemorrhoid ligation with very good results always. Being an adaptation of a technique that we have always mastered, it was easy to do from the beginning. On the fly, we have perfected the technique in the least painful sea position after the procedure.

What happens after ligation? What are the possible complications?

It is usual for the patient to have perianal pain for 1-3 days and it is managed with pain relievers without a problem. On the day of the procedure and the next day, the patient feels a constant urge to defecate and urinate. It is recommended to drink plenty of fluids during that day. There may be rectal bleeding, but it is not usually dangerous or massive.
We have never had a major complication, only some patients with more intense pain on some occasions (which could have been managed with adequate medications). Nor have we had patients who bleed (except for the normal stretch marks immediately after the procedure). However, complications such as acute urinary retention or perianal infections that have been severe have been described. All of those complications are very rare and unlikely. In general, it is quite safe and quick to recover.

Do I have to make an appointment for a consultation?

If the patient feels that he is a candidate for ligation, or that his hemorrhoids are very problematic, it is better to see us in consultation beforehand.
I recommend this for several reasons. The first is to examine the patient to see that there is indeed hemorrhoidal bleeding and not another pathology such as a rectal fissure or a fistula.
Second, it is convenient to give a therapeutic test with medical treatment (pills and/or creams) before proceeding to an invaded treatment such as ligation.
Third, it is important to discuss the procedure, its advantages and disadvantages with the patient slowly and calmly so that there are no later doubts.
Occasionally, someone who comes to the colonoscopy directly requests the ligation and it can be done at once since the patient is prepared in his rectum for it to be performed. But it is better to have more calm to make the decision to proceed and not to make those decisions suddenly. 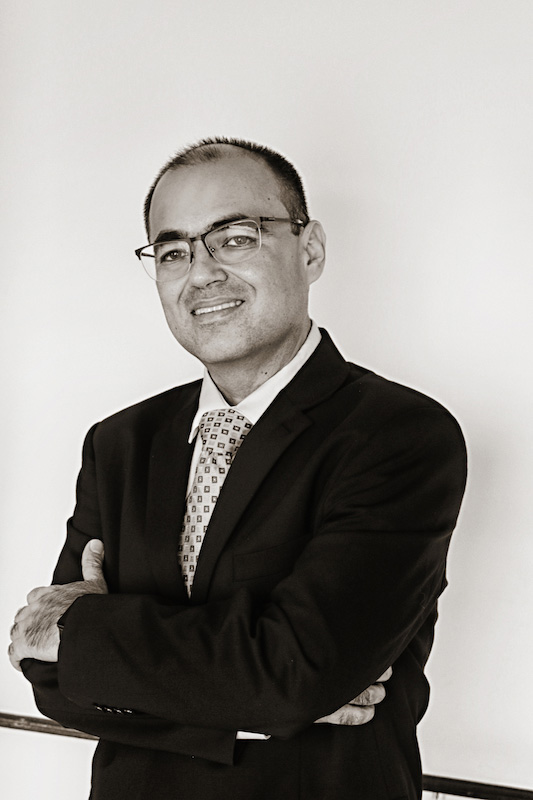